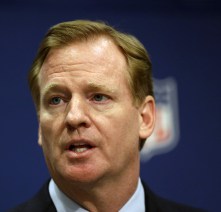 Roger Goodell, the NFL Commissioner gave some point by point steps to resolve the issue that has plagued the NFL with regards to child abuse and domestic violence.

He didn’t squirm much and instead went into his reasons why it was hell no, I’m staying and doing my job.  But then he said, everything is on the table….

What a live event!

Hair stood up on the back of my neck and everything else became unimportant until I could hear what would be said in the next few minutes of the live coverage.  Yeah much like that previous sentence, it was a lot to handle.

He said everything is on the table…interviews, appeals process, etc….  Oh, okay, he wasn’t saying his recognition was on the table, he was smart enough to see the opportunity and he defused it.  Immediately he went into the things that were actually on the table.  Well that’s what I saw anyway!

Oh my god, I thought.

I hope to god someone is on their tip-toes ready to say, you said everything is on the table and all of us here can see from your point-blankness on the issues that you are very concerned about the best for the league, no matter what….Roger Goodell nods in agreement…

So Commissioner Goodell, the reporter continues.  Does that passion for finding out the best solution for the league with regards to domestic violence and child abuse and your statement that everything is on the table, does that include your replacement, yes or no?

And if not, why not?

Silence from the Commissioner Roger Goodell, the reporters and probably most of the audience in anticipation.  But no, it never happened.  No one pushed and tried to get his committment that it should be on the table to further the resolution.

Not that I care if he stays or goes.  I thought he did a good job of picking up the spaghetti of integrity left of the NFL and their care for controlling rich, spoiled football thugs.

A sniper was sleeping today and missed the perfect question during the interview with Roger Goodell’s press conference.