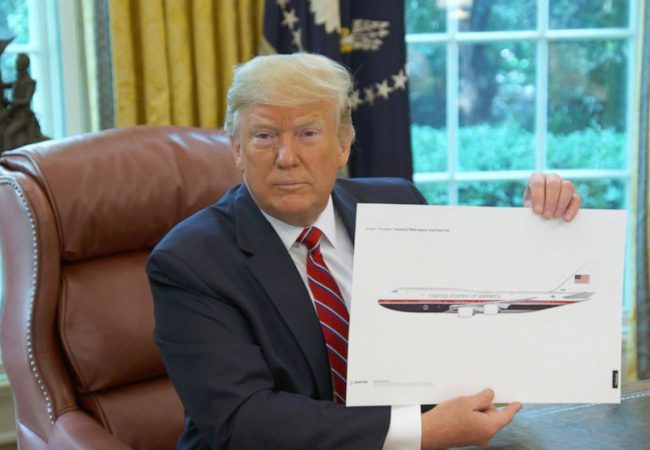 Air Force One may get a makeover if this presidency has its way. President Donald Trump has proposed a complete makeover of Air Force One and in this author’s opinion, its a summary of his Presidency. Let me clarify.

For generations the Washington machine has produced budgets and processes of doing things similar to past officials. There has always been a “standard” a blueprint, an “SOP” (standard operating procedure).

Same with Air Force One. The brilliantly large jet has pretty much remained a consistent traditional design of the classic blue and white.

Now, our President is proposing a change to that color scheme. There are those who complain that the country is being desecrated by such an act by President Trump. That he is being prideful and showboating to redesign something that he flies around in. Funny thing?

According to Boeing, the new units would not be even ready until 2024. It is even suggested that the newly designed jets won’t even see the skies until after the end of the second term of the President.

No, it does not appear that he is proposing the change to showboat or benefit.

Thankfully, President Trump has brought a new approach to virtually every aspect of running the United States of America.

Is change painful? I think we can all agree that most change is painful. But for some people one would think its the end of times.

For others who welcome a fresh viewpoint and efficient changes, its a welcome breath of extremely, vitamin infused fresh air. A patriotic theme to bring a change to Air Force One, the first change since President John F. Kennedy was serving in office.

Hell, if China, France and Russia can have presidential airliners painted red, white and blue, why not us? Those are the colors of our flag.

Its with a heavy heart that I report that some in media may think that Russia had something to do with the color change – I could see that happening on CNN right now, lol.

Critical, free thinkers out there may recognize that this is a symbol of what this President is doing and has done to this Democracy. He has given it a much needed reboot, a fresh coat of paint (and even managed to save the taxpayers $1.4 billion in the negotiation process).

Under President Trump, our nation is respected again and why not change the color of the jets from passive baby blue to a more aggressive red, white and blue? Many soldiers and families have sacrificed under those colors, why not be proud again?